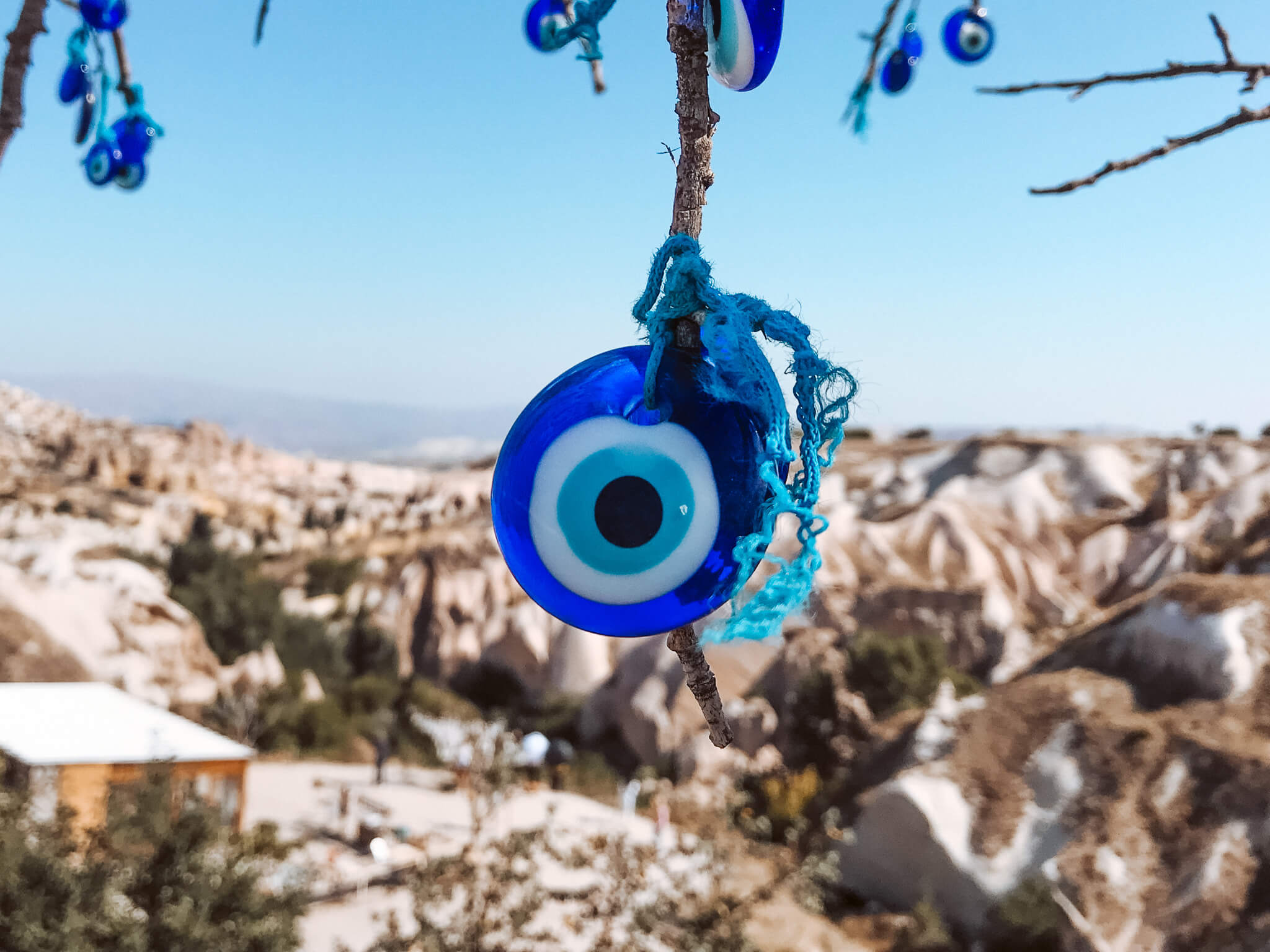 The Origin Of The Evil Eye

Historic And Contemporary Use

Is wearing the evil eye is cultural appropriation? It might be cultural appropriation to wear an evil eye, but with due diligence and careful consideration of how you where it and use it, it can be done appropriately and respectfully. If you’re wondering if a white person can where or use the evil eye, check this post out. If you want to learn more about the history and cultural usage of the nazar (evil eye), keep reading!

I first encountered the evil eye during a quick solo-trip to the land of Cappadocia.

This heart-filled space is world renowned for hot air ballooning. But, it also has unique desert landscapes, world heritage sites, and remnants of ancient civilizations. The rich history of the area has forded it with a variety of cultural influences, one of which, is the sacred treasure, called “The Evil Eye.”

I became infatuated with this accessory during my visit and wanted to buy one for myself. But, I don’t believe in representing something I know nothing about. I wrote this post to dig into the history of the evil eye and decide for myself if it’s appropriate to wear it.

I hope this post educates you on the history and mythological foundations of the evil eye as well as its modern uses. By the end, you can feel comfortable rocking the evil eye and blocking out any bad vibes coming your way.

As with any form of cultural appropriation, you must take careful consideration before choosing to wear or use an evil eye pendant. Most people who are culturally appropriating don’t even know they’re doing it.

I know some people may disagree with me, but I think it’s okay to adopt pieces of cultures that resonate with you. Part of traveling is learning about and picking up on different perspectives in the world. There is a right and a wrong way of doing this.

But, in my opinion, so long as you are consciously and respectfully taking time to learn about the source of the tradition or symbol, you should be able to adopt it into your life. Only with careful consideration and utmost respect, should you choose to do something like this. If you’re feeling questionable about it, that’s a good thing. Listen to that, even if it means you can’t wear your necklace with a clear conscience.

Learn more about my personal views on honoring cultures and worldviews here.

The Origin Story Of The Evil Eye

The evil eye is both a curse and the ubiquitous symbol used to protect against it. The symbol now appears in a wide variety of settings, including art, fashion, and commercial products. Yet its continued importance is not taken lightly by believers. Even non-believers can benefit from the spiritual insights offered by the mythology of the evil eye. People’s reasons for protecting themselves against it is rooted in ancient history.

What is the Evil Eye and where did it come from?

The curse of the evil eye is the result of a malicious glare that causes bad luck or loss to the person targeted by it. This curse is unique in its mythos in that it is not necessarily intentionally cast. Rather, it is the natural result of looking upon someone with jealousy.

Meaning, if you look at someone with an envious tone, the spell has already been put into place and the bad juju has been sent. Basically, if you’re throwing shade at someone, you’re casting an evil-eye spell.

When I was in Cappadocia, I learned that parents accessorize babies with the evil eye as protection against envious onlookers. People also place them on doorways to prevent evil from entering their homes and businesses.

But the Evil Eye doesn’t originate from Cappadocia.

The evil eye curse appears as far back in history as 5,000 years ago among the Euphrates Valley Sumerians [1]. Archaeologists have also found cave drawings up to 10,000 years old in Spain and evil eye amulets from 3,300 BC in Syria [1]. Moreover, some 40% of ancient cultures believed in some form of the evil eye curse, and some belief in the evil eye exists on every continent today [2, 1].

In response to the threat of the evil eye curse, people started to wear talismans — often called “nazar” — to protect against its effects [3]. These nazar are the origin of the evil eye symbol as we know it, the dark blue rimmed circle with white, light blue, and black in the center (pictured below).

The Evil Eye ornaments seen in Cappadocia were originally brought to the area by the Greeks during the Hellenistic era. Then, in 1923, there was a “population exchange” in which all the Greeks living in Turkey went back to Greece. And, all the Turks who had been living in Greece, moved back to Turkey. [10] Turkish people returned to their land and found the evil eye presence. They decided that they liked it and accepted it into their own cultural beliefs.

Did you pin yet?

Contemporary Appearances Of The Evil Eye

In contemporary Western spaces, many people, including celebrities and influencers, have adopted the evil eye symbol as a spiritual tie to eastern culture. For example, Madonna has been seen wearing it as a symbol related to Hare Krishna [2]. The Kardashians have been seen sporting them around as well. [11]

More recently, the symbol has become a fixture in new-age spirituality and bohemian-inspired fashion. It has also been featured in high fashion lines. Yes, you read that right. Leave it to our modern age to turn an ancient symbol of protection into a trendy fashion statement. Am I right to be annoyed by this? Sure, but there’s more to it than meets the eye.

I don’t like to view it as a watered down version of the authentic talismans of ancient times. In fact, its contemporary usage allows the cultural heritage to spread into the modern age.

In a sense, it’s keeping the tradition alive. Could it be cultural appropriation? Sure, but you can read more about how I deal with that in this post.

The present-day appearance of the evil eye most often has a strong association with either self-care and self-love. It’s a kind of light mysticism that can keep the haters and negative energy at bay.

People should wear it either in response to a genuine superstition, if not a full belief in the curse. Or, it could be a tongue-in-cheek acknowledgment that they have something to be jealous of. [5].

That is not to say that the evil eye symbol does not hold the same cultural significance as it has throughout history in other communities. For example, even today, women in Egypt use nazars to protect their children from being cursed by the jealous looks of infertile women. And, it is still tradition in Turkey to bring nazars to newborn babies since they are most vulnerable to the curse [5, 3].

The Evil Eye In Cappadocia

In Cappadocia, as in the rest of Turkey, the evil eye plays a significant role in people’s daily lives.

People give nazar as presents, carry them on keychains, and place them over the doorways to their homes and businesses [6]. Consequently, nazar are among the most popular items available in Turkish markets and are created by craftsmen using the same techniques pioneered more than 3,000 years ago [7].

In Cappadocia, in particular, some of the most striking sights are the “evil eye trees” adorned with hundreds of hanging nazar.

This unique practice likely started before nazar were made of glass, when the evil eye symbol was painted on pottery. Known for its beautiful handmade pottery, it is common to see pottery hanging on trees in the same way the glass nazar are [8].

In the technical sense, nazar work not by “warding off” the curse, but by distracting the gaze of the evil eye. In the case of the evil eye trees, they are captivating, offering both protection to the land and photo opportunities to the tourists.

Some visitors opt to look at the trees, while others hang their own nazar beads from the heavy-laden branches [9].

I chose to abstain from hanging an evil eye on one of the branches. This land has enough protection already, I thought. So, I just bought some to give as gifts to my friends and family.

What We Can Learn From The Evil Eye

Though the evil eye curse has deep roots in history. The underlying ideology still has applications in contemporary cultures. Most interestingly, the use of nazar amulets to protect against the evil eye requires you to establish a sense of contentment with your life. Placing protectiveness over your happiness is a bridge of new-age spirituality and ancient tradition.

If you wear one, you by default, admit that you believe you are grateful for what you have. Even outside of any specific religious or spiritual belief, recognizing the ways that your life may be enviable (even if you don’t believe it is perfect) sounds a lot like practicing gratitude.

This is a beautiful overlap between ancient superstition and contemporary culture. Don’t you agree?

What do you think about the evil eye curse and the protections offered by nazar? Tell me in the comments below!

p.s. Don’t forget to download your immune protection meditation below!